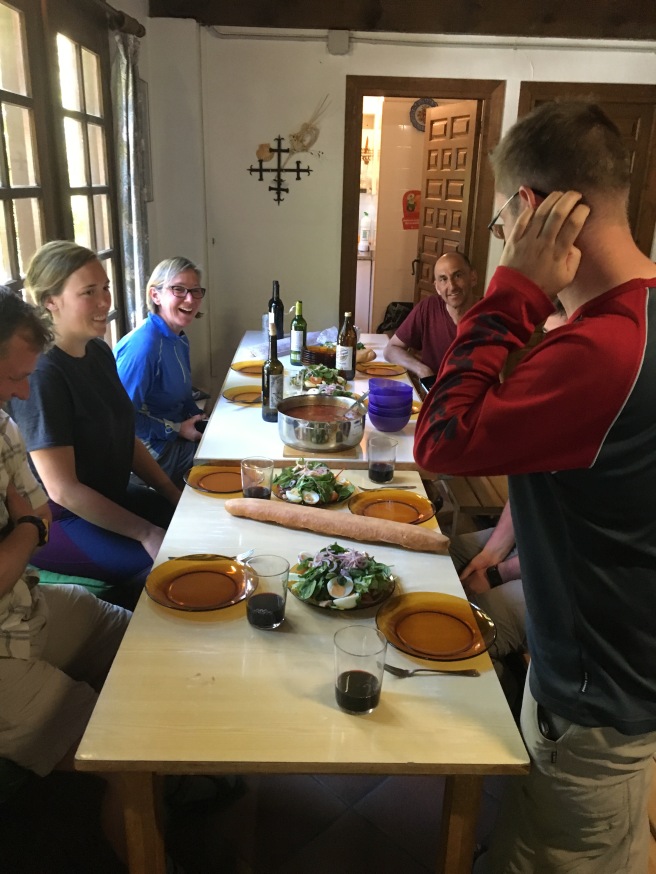 Two nights ago as a group of us shared a pilgrim meal, one of our dinner mates informed us that he is a chef and offered to cook our next meal. We had been having a laugh about a joke told by a South African priest at our table that went something like this: In heaven, the police are British, the chefs are Italian,  the French are the lovers, the Germans the mechanics and the Swiss make it all runs smoothly. In hell, the police are German, the chefs are British, the Swiss are the lovers, the French are the mechanics and the Italians make it all run smoothly. The laughs were of course compounded by the presence of multinational crew, including a handsome, young  French man and the British chef who were part of our party. However, we seized the opportunity and began by planning our accommodations for the following night. I accompanied our Master chef to purchase supplies at the village store close to our hostel, while others picked up ingredients and libations along the way. We had no idea what was in store- a bit of a “stone soup” story. Our friend did not disappoint. His meal was a delicious labour of love and generosity and we were blessed by partaking in the bread and the wine, chorizo soup (flavoured with rosemary that he had picked along the side of the trail), pasta and ensalata (salad with tuna). To coin a popular country song “Yes, I guess that’s my church.”

One thought on “My Church”