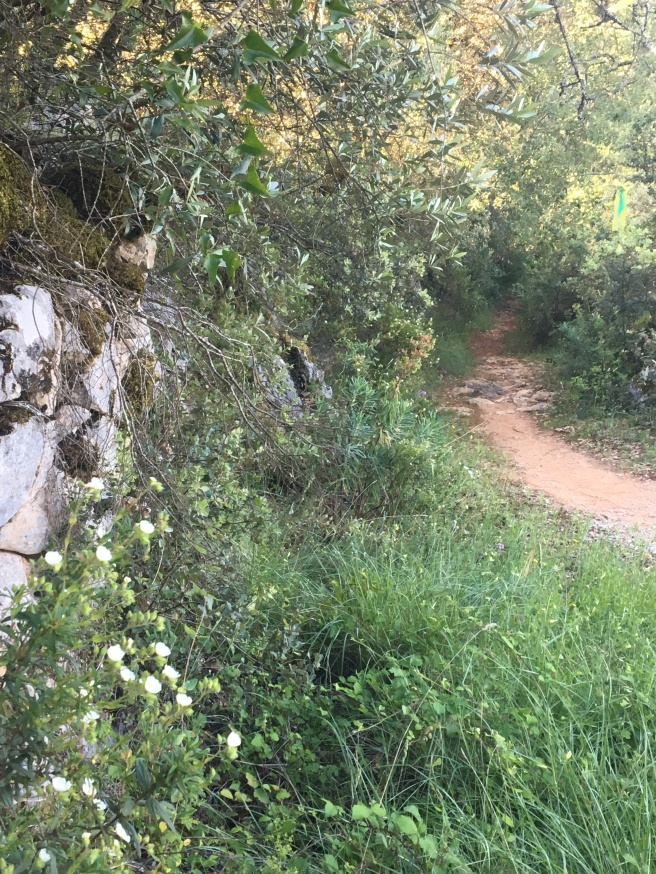 Today started well. I was awake at 5:30a.m. and on the road shortly after 6, in a desperate attempt to beat the heat. The forest trails, with their ancient, moss covered stone fence rows, left me daydreaming about the knights that would traverse these same pathways, protecting pilgrims in medieval times. And as I carried the heavy load on my back, I reminded myself of the Squire from Monty Python’s movie Search for the Holy Grail. All that was missing was a little mud on my face and a couple of hollowed out coconuts and voila- a pretty close re enactment. Made myself laugh for a moment. However, by mid afternoon I wasn’t laughing anymore. My water was almost gone and as I approached the village where I thought I was stopping for the night, I discovered the next village was the one I was actually after. At that point, my 3 year old self had a pity party- tears and all. I wanted to throw my knapsack into the nearest field, call a taxi and be done with the nonsense. However, as the pathway met the asphalt to the village, an elderly woman standing in her doorway that directly fronted the roadway, beckoned me to cross the road. She quickly went into her home and brought out a chair for me to sit on in the shade of the building and handed me two large oranges. Through sign language and a cobbling together of French, Portuguese and English, I discovered her name was Maria and she told me she had lost her husband several years previous. After a lovely break, she filled my water bottle and probably saved me from dehydration today. I told her she was my Santa Maria (Saint Mary) and she kissed both of my cheeks as we parted ways. Sometimes God sends you an angel at the exact moment you need one! Feeling blessed.

One thought on “Angel”